Fragments from the Vistula 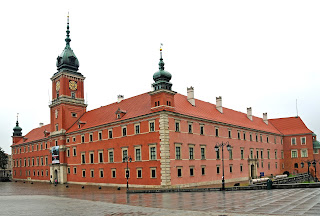 "There are times when being a Poniatowski, is a certified prescription for hair loss, heart attack or ulcers." Prince Witold Sobiestian Poniatowski, remarked half aloud to himself. His gaze was directed out a window on the second floor of the red bricked, white trimmed Royal Castle. The beautiful vista of the city of Warsaw sprawled before him, lite by the coming spring sun, which only served to make his glumly reflective mood worse.  The room, was one of the royal studies used by his father, the King of Poland, for confidential or informal cabinet meetings. With both Papa and Josef, his older brother the crown prince on diplomatic visits to Paris and London, he was stuck with the job of acting as prince regent till they returned. Which made him glummer still, as they both were likely to be away for at least another six weeks.

Prince Witold, sipped his cup of hot coffee reflexively without noticing it or even enjoying it. Dealing with the demands of the cabinet, the Sejm and the Senate, always put him in a black mood he thought. It's not like the work isn't unimportant, or even unworthy. He thought. It was just so... mind numbingly complicated. He quenched the thought with another sip of coffee. Prince Witold vastly preferred his work as a General Dywizji within the Polish Royal Army, at least it was relatively straightforward absorbing both his personal and professional interest, whatever went on in the Ministry of War, and it's various staffs, branches and bureaus. Commanding an infantry division competently was the height of his ambition a present, perhaps a corps in the fullness of time when he was both a great deal older and more experienced as a soldier.

Prince Witold turned from the window, to glance at a map of Europe that covered one of the study's walls. Poland's problem was that politics and what could only be called accidents of history had put it in a perfect devil's triangle, as Papa put it more then once. The Kingdom of Poland, reconstituted by the Congress of Vienna, stood squarely between three of the Great Powers of Europe, who for their own historical reasons would much rather it not exist at all. At present neither Germany, Austria-Hungary or Russia was actively hostile to their credit, but they were not going out of their way to help Poland prosper, at least not to the point it would actively present a threat to them, at any rate. Great Britain was mildly sympathetic to Poland's predicament but not inclined to do much, save make the usual vague promises to help and bland expressions of polite sympathy.

France on the other hand was at least a bit more proactive in it's expressions of sympathy, providing financial aid, favourable trade pacts and some military aid in the form of advisors, technicians and the like. The Polish Army had reached the point where it could said it was adequately equipped as regards small arms and the production of most of the munitions it required. Although there were still pressing shortages in medium and heavy artillery that couldn't yet be filled fully domestically. Many artillery batteries had two or three guns on their establishments when they should have had four or more. The Air Force, was much the same having decent aircraft at its disposal both French and domestic designs to chose from for reconnaissance, air patrol and light bombing duties. the small Navy was much the same, although, the thought of Poland, a landlocked country having any thing called a navy, seemed ludicrous at times to Prince Witold. The bulk of the naval ships possessed by the Polish Royal Navy were in fact riverine monitors and gunboats to patrol the various rivers that crisscrossed Poland, the rest were sky ships, many of them unfortunately of the first and second generation, not unlike those first launched in the Crimea War of the 1850s. Poland's arsenal of armoured fighting vehicles, land ships and land fortresses was almost as unimpressive, in fact compared to it's possible enemies it was downright disheartening when he thought about it.

Prince Witold frowned, if war broke out with even one of the states surrounding the kingdom, without outside help from either France or Great Britain, it would go ill for Poland whatever pride might  say and the valour of it's soldiers and citizens might accomplish. He turned back towards the desk and sifted through the reports and dossiers, enough brooding, Witold, the business of the kingdom will not wait. Finding the next folder he had been directed to read, he broke the tap and began turning the pages.