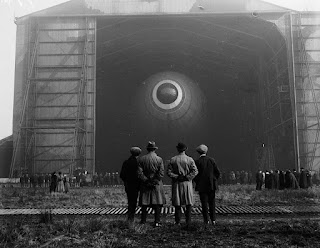 Wedgewood stopped his pacing as they bow of the rigid airship emerged from the gapping maw of the hanger. The X-2 was as big as a battleship, longer even. Cables attached to the airship's nose went taunt as the windless motors activated to them began to work and assist in drawing the airship out of the hanger. A small battalion of men, held fast to cables hanging from the airship's sides, others held on to brackets and handrails mounted on the command and engine cars. Handling crews were necessary to manovering airships safely in and out of their hangers, although they were sometimes derisively called ground floor acrobats by airship crews. Such contempt was unjustified in Wedgewood's opinion, considering the skill and persistence require by the handling crews to do their jobs, not to mention agility and sheer strength and endurance. An Airship leaving the safety of it's hanger was at it's most vulnerable, rigged to neutral buoncency, airships were at the mercy of air pressure and wind pressure while making the transit into open air. A cross wind across the mouth of a hanger, could smash the airship against the sides of the hanger mouth as it emerged, breaking or buckling structural or engine frames, tearing gas cells, rupture fuel or water tanks or worse, breaking the airship's back if it was a rigid airship.

Wedgewood, pulled the folded map out from his coat pocket to consult it. The X-2 would leave Cardington, today and fly to the Portuguese Azores on the first leg of it's journey to British India. At the Azores, it would take on additional fuel from a collier and then proceed to St. Helena island, from there the X-2 would proceed to the Cape of Good Hope. The Admiralty would have prefered, that the X-2 cut across Southern Africa from St. Helena, but this had been vetoed by the Foreign Office, with some reason, Wedgewood felt. That region was contested by three colonial powers: the British, the Portuguese and the Germans, and the presence of a spy airship would just be akin to throwing a lighted match into a barrel of parafin oil. The Admiralty may have thought it was worth the risks, the Foreign Office did not and had no intention of trying to clean up the political mess it would likely kick off. While the Portuguese were an ally and generally friendly, they could be touchy about anyone snooping around their colonial possessions. The Portuguese, were painfully aware that several of the other European powers, Great Britain included, looked covertously at their foreign holdings in Africa and Asia. The Foreign Office wanted no part of getting on the wrong side of the Germans, either. Kaiser Friedrich was as a rule friendly to Great Britain, and those in the Foreign Office wanted to keep it that way.

So the Admiralty had to accept a detour around the Cape of Good Hope, Madagasgar and the French colonial islands that surrounded it, into the Southern portion of the India Ocean, before the X-2 turned for the island of Ceylon. The X-2 would stay at Ceylon for a few days to effect any repairs or refits of equipement that might be required and top up it's supplies and fuel for the journey to the Indian Northwestern Frontier. A secure airship field and supply base had been prepared there to assist the X-2, for the crossing of the Hindu Kush and Pamir mountains. That part of the trip, had Wedgewood geniunely worried, the Hindu Kush and Pamirs were formidble barriers and the weather over them could be bitter and treacherous in the extreme. Captain Varley had also been sufficiently worried about it, that he had offered to transfer members of his crew who had made previous flights in the region to assist Captain Turner's navigation staff. Both Wedgewood and Turner had been happy to accept the generous offer.

Captain Varley walked over to join, his Vice-Admiral, as the X-2 slowly emerged from the hanger, both men uncouciously held their breath and did not expel it till, the X-2 floated safely into the open air. Both men shared a rueful glance, Right, the first real hurdle of this mission, out of the way. Both men, then walked under the shadow of the great airship, it's envelope painted a dull, naval grey for the long voyage to India. British tricolour roundels decorated the nose and bow of the airship, along with the ship's name in large black lettering X-2. Captain Turner jumped down from the forward ventral control car, and came to meet them.
Posted by Sir Leo Stanley Worthing-Topper at 7:40 PM