The Serpent's Isles (Part I) 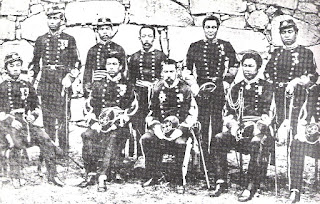 Go-cho Totani Tayo, walked along the rough cut stone pathway on her way to the Green Lagoon's defensive batteries to collect the morning reports, the balmy early morning sea breeze caused her long black hair to stream out with the wind from under her service cap. The sun was just making it's way lazily up over the horizon the same way it seemed to every day since she'd been posted here. The Serpent's Isles were not much to look at really, being an irregular clump of palm forest and jungle covered mountainous volcanic islands and atolls coiled around two deep water lagoons and an equally deep water bay hedged by jagged coral reefs and sandy beaches. The name of the place came from it's overall shape, which from the air suggested the look of an open mouthed serpent half coiled back upon itself.

The isles, had been inhabited on and off over the centuries, Totani knew from that from both her history books and first hand knowledge. The signs were to be found all over the islands, the place had been visited by the Ainu, Polynesians, Chinese and Lemurians of ancient times and all of them had settled here. Although none it seemed had stayed in possession or prospered for long if they did. Totani's dark brown eyes surveyed the distant horizon, out across the foaming waters capping the reefs, the sun glintered off the endless waves of the Pacific. These islands were a lonely spot amidst the endless water, the islands of the Japanese Empire themselves were barely visible even on a clear day from the mountain tops. The Serpent's Isles stood like a lonely sentry out beyond a fortress gate. A sentinel was what the islands were: taken by force from the Wako, the dreaded pirates of Asian waters during the first Oda Shogunate, and then held against them thereafter.

The Nests of the Red Serpent, the pirate folk of the Lemurian snake-men had tried to retake the isles to use as a permanent privateering and slaving base during the Toyatomi Shogunate and they had succeeded for a time before imperial forces under the Tokugawa Shogunate had won the isles back and purged the vile Nests. Totani felt herself shuddering despite the heat of the day, there were still spots on these isles that spoke of that old carnage; areas of sprawling ruins, fire blacked, broken stone and crumbling wooden timbers, creeping vines and jungle undergrowth wrapped around and through rusting weapons and armour. Sometimes decaying bones were visible, a half hidden skulls of inhuman origin leered from the vegetation or watched mournfully with darkened eyeless sockets. These places, mercifully few now, were shunned by both the Japanese soldiers and sailors of the garrison and the small communities of Japanese and European fishermen, whalers and petty merchants and their families that resided both seasonally and semi-permanently in the isles.

These days the place was a quiet outpost of the Empire used sometimes as a victualing, watering and coaling station by ships making a passage to the distant Midway islands and still more distant Hawaiian and North American shores. The islands yielded fresh water, tropical fruit and vegetables in some abundance and there was enough wild game and fishing to top off any visiting ship's onboard supplies. Certainly they served the Imperial Army garrison;'s needs sufficiently, that a military supply ship only needed to show up once or twice every few months.

The Soryu Battery, a roughly circular pillar of living volcanic rock and coral some eighty feet high loomed on the horizon. It stood just inside and to one side of the entrance of the smaller of the two atoll lagoons, called by the locals the Green Lagoon. Its name referred to both it's relative shallowness and the resultant colour of it's waters, the place made a suitable protected anchorage for seagoing junks, larger sailing sampans and European seagoing sailing craft of moderate size. The larger windjammers, clippers and steamships typically used either the Blue Lagoon or Fang Bay, both of which had deeper and wider entrances and greater depths within their confines. The Hiryu Battery stood on the other side of the lagoon entrance and between them, they effectively covered both the lagoon's mouth and it's relatively spacious interior. Hiryu was built upon a roughly triangular ledge of rock nearly forty feet high surrounded by coral reefs at it's base. Almost an island in itself, it was reached by a long causeway that traced along the top of the atoll that encircled the lagoon and a short bridge.

Totani saw a tall Lemurian and a heavily bearded Ainu stride down an adjoining path that emerged from the hillsides to her left, she picked up her pace to meet them.


Note: (1) Go-chu is the Imperial Japanese Army rank of roughly equivalent to a full corporal or junior sergeant. Historically the non-commissioned and lower ranks of the IJA were in a state of flux at various time from the 1880s to the 1940s. (2) Japanese names in this story are given under the traditional Japanese style/convention: that is family name first, followed by personal name.
Posted by Sir Leo Stanley Worthing-Topper at 7:22 PM