My Own Family Connection to the Victorian Era: Lieutenant-Commander H.F. Carter, M.V.O., RN

Lieutenant-Commander H.F. Carter, M.V.O., R.N. (Ret.), joined the British Royal Navy in 1886 and served in H.M.S Frobisher as an acting gunner and subsequently served in several other vessels, eventually becoming Gunner of the H.M.S. Thrush (colonial gunboat of the Redbreast-class, laid down 1889), who's first officer was His Royal Highness Prince George, the Duke of York*. Subsequently he was transferred to H.M.S. Crescent (1st-class protected cruiser of the Edgar-class, laid down 1890), who's commanding officer was again his Royal Highness the Duke of York. Carter later served aboard the H.M. Yacht Victoria and Albert for eight years and was promoted to Lieutenant and honoured with membership in the Royal Victorian Order.
H.F. Carter had retired in May 1914 but was recalled to active duties in July 1914 and served until the end of World War One. He was honourable demobilized at the end Great War and received a final promotion to Lieutenant-Commander sometime in March, 1919. He died in retirement at the age of 74 at his home in North End, Portsmouth.
He received at least three medals during his Royal Navy service, the Royal Victorian Order's Member of the 4th or 5th-class, and two other medals which from his photographs I have not yet positively identified. Though I suspect the center decoration and the one on the side closest to the shoulder are service medals of some sort. 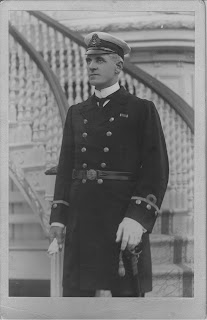 * Prince George, the Duke of York, later became His Royal and Imperial Majesty King George V of Great Britain and Ireland, and Emperor of India in 1910.
Posted by Sir Leo Stanley Worthing-Topper at 1:12 PM