Nation States of An Age of Steam, Steel and Iron: Part Six

Brazil, ruled by Emperor Pedro II, once a colony of the Kingdom of Portugal, which unique amoung the countries of South America won it's freedom and independence from it's mother country peacefully in 1822. In 1888 Pedro II's government took the unprecedented step of abolishing slavery within the Empire as part of it's ongoing program of internal and political reforms. Many of these reforms, particularly abolition, are opposed by both the Brazilian planter class and Brazilian Liberals in Parliament although they enjoy widespread support amoung the Brazilian people as a whole. The mainstays of the economy are rubber, coffee, bananas and cattle. The export of oil and bauxite have emerged in recent years to augment the largely agricultural character of the Brazilian economy.

Argentina, Brazil's chief rival for dominance of South American affairs, is also at constant loggerheads with Chile over territorial disputes, particularly over Chilean possession of the Cape Horn-Tierra del Fuego region. A similar situation mars Argentinian and British relations with reference to the Falkland Islands.  Argentina once a Spanish possession freed itself from Spanish rule in 1816, although it's current borders were only solidly defined by the 1860s. Argentina's political history has been uneven, since it's founding being frequently marred by internal upheavals, which only settled down in the 1830s and 1850s, followed by a stable period of internal peace and prosperity, with governmental policy being aimed at promoting schools, universities, immigration, railways and communications developments.  Argentine's booming economy, which is considered the foremost in South America, is chiefly fuelled by the export of cattle, silver, grain and oil.

Chile, Achieved it's independence from Spain in 1810, although not formally recognized until 1818. Chile became the most preeminent naval power in South America, with it's very considerable successes in the 'Nitrate War'. This military lead is stubbornly maintained by the Chilean government with each passing year. The country's robust economy is based on copper and saltpeter mining, grain production, cattle products and oil production. Chile's internal peace and harmony is sometimes threatened by a tendency towards revolutionary changes in governments.

Bolivia, Became independent of Spain as part of the Republic of Peru, from which it promptly succeeded, although it was not recognized as an independent state until 1825. Like Peru and Chile, Bolivia was a participant in the 'Nitrate War', which cost Bolivia its coastal province of Atacama and thus all access to the sea. This did not as adversely affect Bolivia's economy as was initially feared due to Bolivia's extensive and inreasingly profitable mining and exportation of tin and silver. To date, Bolivia, maintains the strongest sky fleet both military and merchantile of any of the countries of South America.

Venezuela, Like it's neighbours Colombia and Ecuador, it became independent of Spain in 1811, but opted to join the State of Gran Colombia, which disintegrated as a working country by 1830. Venezuela, consequently reformed itself as a republic with a federalist constitution, which came under threat with the internal conflict termed the Federalist War in 1861-68. Dictatorial rule became the norm for the country after this period. The country's economy has developed towards the widespread cultivation of coffee, cattle and oil products for export.

Colombia, A former Spanish colonial possession, which was once a part of the state of Gran Colombia (the future states of Ecuador, Colombia, Venezuela) which was proclaimed in 1819 but disintegrated in 1830. Briefly becoming the United States of Gran Granada, until 1861, whereupon the country became the Republic of Colombia. The country has suffered constant civil wars between unitarians, federalists, liberals and clericals. This situation only stabilized in 1858, when a confederation was agreed upon and finally reformed as a formal republic in 1861, through the intervention of the American Union. Colombia, virtually lost control of the province of Panama, through Imperial French political, financial and military intrigues during the 1850s.  Panama to Colombian chagrin, later declared it's own formal independence in 1871. The country's developing economy is driven by the export of bananas, cattle, coffee and oil.

Peru, The Last former Spanish colony to gain independence, in 1821 Peru immediately fractured into two countries, as Southern Peru, declared it's own independence in 1825 to become the State of Bolivia. Peru was nearly splintered apart by the consequent Civil War of 1842-45.  The national government of Peru increasingly took dictatorial powers both during this conflict and from this period on. The following 'Nitrate War' of 1879-1883 between Peru and Chile, resulted in Peru's defeat which was occasioned by the discovery of widespread saltpeter deposits which had international economic applications both in the production of powerful explosives and agricultural fertilizers. The economy of Peru, is both strongly agricultural and increasingly industrial being based on the export of oil, cattle, grain products, and silver, copper and saltpetre mining

Paraguay, Gaining it's independence from Spain in 1811. Paraguay, particularly under the Lopez family which dominated it's politics and as often as not acted as the country's dictators, attempted to build itself up into a significant power in South American political scene. President F. Solano Lopez, through his excessive territorial ambitions for his country pitched South American into the devastating Paraguayian War in 1865 only ending with Lopez's death in 1870 and the virtual destruction of his country. Paraguay is still recovering from losing over seventy percent of it's population and the destruction of both it's capital city, it's military and economic inferstructures along with many of it's more prosperous towns and villages.

Uruguay, Found itself in the extremely awkward position of being desired by both Brazil and Argentina, even before it was a formal country and being briefly annexed at one time by both countries in 1817 and 1822. Only in 1828 with the Peace of Montevideo, did Uruguay gain it's own independence from it's two larger neighbours. Uruguay found itself the target of it's neighbor Paraguay's territorial ambitions in the 1865-70 Paraguayian War. Uruguay survived the war by allying with Brazil, Bolivia and Argentina. Quietly prosperous, Uruguay's economy is based on acting as a major transfer and storage point for foreign sea and air trade and the local production and export of grain and cattle products.

Ecuador, Once part of Gran Colombia, Ecuador was forced to forge it's own independent path when that country ceased in 1830. While formerly the government emphasized friendly relations with the Roman Catholic Church, current relations - particularly after the assassination of President Moreno - between Ecuadorian liberals and clericals is becoming increasingly hostile. The local economy is geared to large scale cultivation and export of coffee as it staple cash crop. 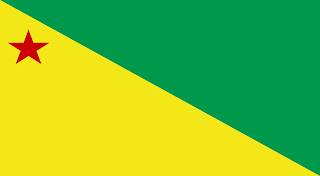 Acre, A South American republic, which was originally part of Bolivia, which was settled largely by Spanish Bolivians and Portuguese Brazilians immigrants from 1860 onwards. A series of revolts starting in 1863 occurred against Bolivian rule over the region. These revolts largely instigated by the Brazilian immigrants were generally unsuccessful until the Acre Revolutionaries adopted strict military discipline, organization and hired better leaders and built an army of some thirty thousand soldiers, which won battle after battle against the Bolivian Army. The Arcean Republic occupies territory claimed by Peru, Bolivia and Brazil and has been involved in three wars - it's 1863-1883 War of Independence, the 1865-1870 Paraguayan War and the 1879-1883 Nitrate War/Pacific War in order to expand, hold and survive the efforts of the three countries attempts to erase it. The Republic of Arce was not formally recognized by Peru, Brazil and Bolivia until the 1883 Treaty of Cidade do Arce.  The pillar of the Acrean ecomony is large scale rubber cultivation, with subsistence farming and animal husbandry making out the balance.