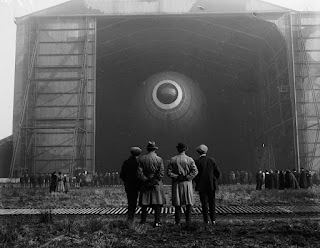 The sun had yet to raise up over the sleepy countryside in Bedfordshire. The Royal Airship Works at Cardington were however another matter, the grounds and associated buildings, barracks and worksites of the airship works were a teeming hive of activity, as work crews, airship handlers and mechanics were up and moving purposefully inside and outside the massive double airship hangers housing the four R.N.A.S. rigid airships of the Special Airship Reconnaissence Division.

The Special Airship Reconnaissence Division was the brainchild of both the Admiralty and Her Majesty's Secret Service. The Airship Service of the Royal Navy was divided into several commands, each with their own specialization. Technically the S.A.R. Division did not exist at least on the offical books of organization of the Royal Navy any way, and was hidden behind a wall of governmental bureaucratic and naval administrative red tape. This was hardly surprising, as the S.A.R's primary job was prying into the military affairs of other nations, particularly things those nations wanted to keep secret.

The X-class airships were themselves a top secret development within the British Airship establishments. They were larger, faster and possessed greater carrying power then any other British airships in existence. The X-class used a different lifting agent in their gas cells, then other British airships either military or civil, which used hydrogen gas. Hydrogen while highly effective at producing lift and being both easy and cheap to produce, had the highly dangerous property of being highly combustible when mixed with any amount of oxygen. Thus hydrogen filled airships had to carry out special safety procedures and rigid operational protocols to minimize the chances of accidental fires and explosions.

The X-class used Helium gas, which while a great deal more expensive to produce or obtain, and being less effective at producing lift then Hydrogen, was a great deal safer to operate with. Offically the only source of Helium was found within the state of Texas, which was part of the Confederate States of America. The Confederacy had placed strict limits on how much Helium it exported at any time to any one power. Speculation within the S.A.R. was that British authorities had discovered another source of Helium to exploit, although it was felt it was not a large source otherwise the whole of the R.N.A.S. airship fleet would have been converted to it.

Of the four X-class airships, HMS X-1 had been by far the most active. X-1 had already made several lengthy and successful research cruises over North America, Central America and South America as well as well several shorter trips over the North and South Atlantic Oceans. The X-1 had also been busy training the crews for the soon to be operational X-3 and X-4. The HMS X-2 had been moderately active compared to her sister ship, having made several full power trials and endurance test flights, and been used to test new outfits of spying equipement. X-2 had made only three operational flights, the first had been over the Mediterrean Sea, which had been quiet and uneventful enough. The second cruise had been over Austria-Hungary, which had been something in the nature of a diaster. The X-2 had been spotted early in the start of it's cruise after it had left from a secret base in the Kingdom of Greece. How, was still not known, but Austro-Hungarian air and sky ships had dogged it's flight path the momement it entered Austrian territory and persistently refused to be shaken off no matter what evasive action the X-2 had taken.

The captain of the X-2, Dame Marianne Turner, had decided on her own authority to call off the flight. A sensible decision given events, but not one welcomed by her superiors in the Admiralty, the Airship Command or the Foreign Office. After a refit at Malta, the X-2 had been sent out on another long-range reconnaissance, over the length and breath of the Ottoman Empire. This mission proved largely successful and was completed without serious mishap. Following both X-1 and X-2's return to Cardington, both airships had been taken in hand for massive refits and partial rebuilding to test new equipements, new engines and for the addition of two extra gas cells within their superstructures to increase their height climbing and weight carrying abilities.

X-1 was found to have suffered a major deterioration of several large sections of it's envelope covering, particularly just foreward of the tail fin assembly and just back of the airship's nose, wrapping around much of the hull. Both called for immediate and extensive refurbishing before the X-1 could fly again, particularly as the bow section which took the most stress when flying with dynamic lift and borne the brunt of rain or hail while in flight.

For Vice-Admiral Sir Alfred Wedgewood, who paced back and forth impatiantly outside the cavernous hanger door, which slowly rolled open to allow the airship entombed within to exit. This necessary delay was not a welcome development. The replacement of the affected envelope cover would take several weeks, including trials to see if the new cover was up to standard. Wedgewood had ordered all of the other X-class ships checked to see if they had suffered the same deterioration. So far, only X-1 and X-2 showed it this problem. The X-3 and X-4 were still in their respective double hanger under construction and while they were largely finished as far as their framework and internal structures and fittings were conscerned, their Gas cells had been fitted and test filled, neither had as of yet been sheathed in fabric.

In X-1 and X-2, the outer cover was linen fabric, silver doped on a red oxide base. Square section sample taken from both airships had revealed that much of the cover had been repaired or strengthened on it's inner surface with two-inch tapes that had then been stuck on with adhesive or doping. Wedgewood had wound up putting his hand through one of the samples, it was nearly as friable as scotched brown paper and broke up easily into flakes if even light pressure was applied to it. The Airship Technical Lab had anaylized the samples and discovered that several sections of outer cover had reinforcing patches applied to them with a rubber adhesive solution. The solution was found to have reacted with the doping agent and the linen cover to cause the fabric to deteriorate.

Vice-Admiral Wedgewood, now found himself in a difficult position, the X-1, the most experienced spy ship in the S.A.R. had been requested by the government to undertake a special intelligence mission in the Central Asian territories of the Russian Empire. There was no way, that the X-1 could be made ready in time to depart for British India to undertake the operation. Actually the engineers had informed the admiral, that the airship could be made ready but it would involve cutting corners on the repairs and cutting the needed speed, power and endurance trials necessary to confirm the X-1 was air worthy to the absolute minimum. Wedgewood, his airship works engineers and Captains Turner and Varley were all agreed, that was both dangerous and stupid.

That left him with only one other option, given the circumstances. The X-2 had to be assigned the job, and prepped to undertake the mission to India and beyond. Wedgewood was assured that the X-2 was ready for the mission, her refit and rebuilding had gone smoothly, all the previous trials and tests had also gone extremely well. True, X-2's captain and crew was less experienced then X-1 and it's captain, Sir Markus Varley. However, both he and Varley felt confident in Captain Turner's competence and discretion.
Posted by Sir Leo Stanley Worthing-Topper at 6:40 PM