Fragements from the Kingdom of Ruritania 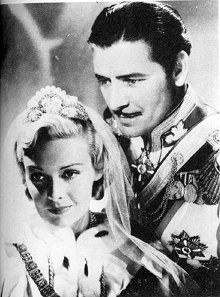 The beginning of the new year marks two upcoming and special events in the history of our country, both of which occurred some fourteen years ago. In 1875, the much aged and highly esteemed King Rudolf IV, died leaving the leadership of the kingdom of Ruritania to his acknowledge legal heir, the Crown Prince Rudolf. The Crown Prince, was subsequently enthroned as King Rudolf V in due course and entered into marriage with Princess Flavia, his cousin: now our gracious and much beloved queen, some months later.

The ascension to the throne by Rudolf V, while on the surface was smooth and generally accepted by the people of Ruritania, was in fact behind the scenes marred by much unhappy controversy and in some quarters outright treason by certain Ruritanian nobles and military officers. A foreigner, one Major Rudolf Rassendyll of Great Britain, played a most gallant and effective part in foiling that treason (along side a great many Ruritanians) but unfortunately lost his life assisting King Rudolf V in retaining his throne despite the efforts of some of his extended family and their collaborators.

The King and Queen's marriage, which caused some marked uneasy amoungst both the populous at large and the Royal Court when it was first contemplated and then arranged and before the Crown Prince came to the throne, has developed into a genuine and enduring love match.

Since that time, our king and queen have been graced with four children: Crown Prince Osric Rudolf Michael (b.1876); Prince Friedrich Rudolf Anton (b.1878); Princess Osra Flavia Antoinette (b.1881) and Princess Amelia Flavia Charlotte (1884). The Royal couple (and their offspring) are dedicated to their country's interests and have at all times worked in season and out of season to ensure that our future will be a prosperous one.


The Royal Palace, Streslau, the Kingdom of Ruritania, January 1889.

King Rudolf V, looked up from the many state papers laid out before him, von Tarlenheim his chief adjutant stood quietly and diffidently at his right shoulder and glanced at the gathered ministers and senior administrative officers of the Royal Cabinet. The steady murmur of conversation washed over him, as he briefly considered the business of the day that had been discussed and dealt with. Rudolf sensed the assembly's mood of moderate satisfaction. Ruritania was a kingdom at peace, with a steady growth of it's domestic industries and a favourable and agreeable balance of trade with it's neighbours.The people were in the main, broadly contented and looked to their individual and collective future with some assurance and confidence that it was to be prosperous.

Prince Karl von Elphberg, Vice-Admiral and Commander-in-Chief of the Ruritanian königliche Luft Marine and Aeronautics Minister, had raised two bothersome points for the cabinet to consider, both concerned officers in the Luft Marine and the urgency of settling who was to replace them. The posts in question were that of Luft Marine Chief-of-Staff and the Aeronautic Fleet Commander. The incumbents of both positions were no longer available to serve, due to serious health complications for the former and long delayed retirement for the later. The problem being the relatively small sky fleet of Ruritania did not have an over abundance of highly qualified officers to replace either officer, who were amoungst the best Ruritania had.

Rear-Admiral Bernhard Ritter von Winterhagen, had been hit with an acute appenditis the week before the cabinet meeting, and while the necessary medical operation had been a success, his health had been badly impaired and a long recovery was forecast by his physicians.  Commodore Ortwin Edler von Waldhausen zu Skell was well into his seventies, and was well past regular retirement age but had volunteered to stay on until someone else could be selected.

Prince Karl had noted there were some officers to chose from as acting replacements but it meant pulling them out of other assignments, which of course would create still more administrative and command headaches for Prince Karl and his staff. That was of course, if Prince Karl and the Cabinet could decide on who amougst the Luft Marine's officer corps would be the best replacements.

King Rudolf looked at his assembled cabinet and could see the apprehension on their faces, the arguments over these two appointment would be involved, partisan and interminal, but the sooner they got it over with the better for both the Luft Marine and the Kingdom.


Note: I have watched over the years, four of the Prisoner of Zenda movies, the 1922, 1937, 1952 and 1979 versions respectively. The 1937 film remains very much my favourite with the 1979 film a close second. I have read both the original Anthony Hope Prisoner of Zenda novel and it's follow up Rupert of Hentzau, many times and have begun to read the second book of the Ruritanian trilogy, The Heart of Princess Orsa.

Within An Age of Steam, Steel and Iron, the Ruritanian stories followed a somewhat different track in some areas and with some additions to the cast of characters, to be detailed in following story fragements or in multi part stories.
Posted by Sir Leo Stanley Worthing-Topper at 8:09 PM