The Man in the Red Mask (Part III) 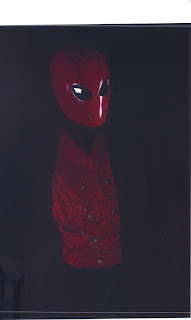 Most gentlemen would have reacted with scorn or anger at watching Hachett count the money he had just been given, considering it a slur upon their professional integrity or personal honour. Lord Hood, however took no umbrage at this practical action. Like Hachett, he had been on occasion in his career subjected to the all too frequent caprice of clients or partners. Hachett nodded his thanks, and quietly left the room. Lord Hood meanwhile picked up the packet again from the table and turned out the lamp, plunging the room into complete darkness. His business concluded for the evening, he left the derelict building as secretly as he had entered it and proceeded back to one of the many buildings spread throughout the East End of London, that served him as residences, storehouse, and archives.

Liam Cassidy one of his trusted lieutenants met him at the door, when he entered the old urban mansion that stood like a towering sentry above the sprawling walled park that surrounded it and isolated it from the rest of the city. One look at the handsome Irishman's scowling face told him something had come up, a something that he did not approve of.  Lord Hood, motioned silently for Cassidy to follow, and made his way to the spacious, luxuriously appointed room that served as his personal study and business office.

"What is it, Mister Cassidy?" He finally remarked when he had seated himself in the large, comfortably stuffed chair behind a huge desk that wrapped around it like a horseshoe. He arched his masked head and looked at his man with a hidden but obviously quizzical expression, as he steepled his hands together just below his jaw. "You, appear to you have swallowed something particularly sour this evening."

Cassidy, standing before the desk, grunted in acknowledgement of his employer's arch and bantering remark. The soot black haired and bearded, sparkling blue eyed and powerfully built Irishman mulled over how to voice the subject which was clearly on his mind. Then shrugged expressively and decided to express himself bluntly as was his usual custom.

"That rust bucket, Sixer, is here to see you."
Posted by Sir Leo Stanley Worthing-Topper at 10:12 PM