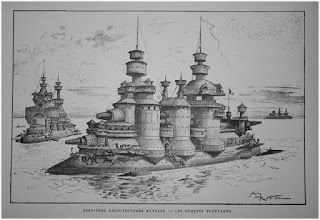 In 1887, the French Ministry of the Marine and Colonies, allowed itself to be talking into and embark on one of the most bizzare projects in it's history, the design, contruction and outfitting of three Forteresses navales mobiles (mobile naval fortresses). The project was of mammoth proportions, stupefying budgetary recklessness and epic megalomania. Dubbed the Merovingian-class (in both Naval Staff and Popular Press circles), the three vessels that would emerge from the naval dockyards at Brest (Merovech), Toulon (Childeric I) and Cherbourg (Clovis I) to a common design specification, which changed frequently during each vessels long construction, determined by the Marine Ministry's Naval Technical Department. The ships, their design, purpose and expense have been the subject of considerable and ongoing infighting and bureaucratic wrangles between the Naval General Staff, the Ministry of the Marine, the Chamber of Deputies and the Traditionalist and Jeune Ecole fractions of the Marine Nationale.

The mobile naval fortresses, were in many ways the ultimate development of the French naval coastal defense turret ships and battleships which had been a standard part of both Traditionalist and Jeune Ecole ship building programs for decades for harbor and coastal defense. They bore a more then passing similarity to the landships monolithic cousins, the Land Fortresses, being massive, heavily armoured and heavily armed but  being extremely ponderous and slow moving.

Each vessel took some three protracted years to build and absorbed a great deal of effort and resources in their respective dock yards. New fabrication facilities and new slips ways and dry docks had to be constructed at each naval port to tackle the job. When each ship finally emerged through the first months of 1889, they were found to be massively overbuilt, hideously over budget and the Naval General Staff had not the slightest operational role in mind or practical use for them. The class of nautical giants quickly were nicknamed the "Ne fais rien les rois" or the "Do Nothing Kings" a mocking reference to the later Merovingians kings of the old Frankish kingdom of France.

Each of the three vessels was visually distinguished by massively tumblehome hulls with long plough bows and sloping sterns, and equally massive superstructures. Derrick hoists located near the bow and stern allowed each vessel to carry up to eight 2nd-class torpedoboats or submersibles into action with it. Numerous ships boats and steam launches were carried aboard ship for ferrying crew, supplies and troops both too and from the huge vessels. Armaments varied somewhat between vessels and no two ships in the class carried exactly the same weapons or had them arranged in the same way. The ships are rumoured to displace well over 50,000 tons and carry 18-inch or 20-inch naval guns as their main armament supported by numerous smaller weapons for anti-aircraft, anti-boarding party and anti-ship duties. Exact details of the ships are at present regarded as state secrets by the French Government.

Each vessel was designed to carry a full mixed brigade of troops over long distances, and even a full infantry division could be carried over most transoceanic distances. Working together the three vessels could carry, transport and deploy an infantry corps of two divisions, a cavalry brigade, the Corps Headquarters and all the corps military support units and logistical elements.
Posted by Sir Leo Stanley Worthing-Topper at 3:30 PM