A War Minister's Reflections (Part I) 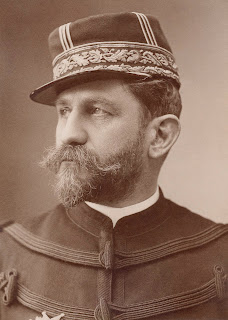 Général de division Georges Ernest Jean-Marie Boulanger, sat at his desk, working through the last of his day's despatch boxes and the mountain of files he had to review and sign each day, which required his attention as the French Minister of War. He had been appointed to the job in 1886 to assist the Cabinet and the Supreme War Council in reforming the Third Republic's army and navy. He had inherited the colossual mess that the French military found itself in, in the wake of the various wars and internal and external traumas that France had experienced throughtout the 1880s. While, Boulanger felt that he and his service and political collegues had made considerable progress in various structural and administrative reforms within the military, a great deal still remained to be done, especially in the areas of recuritment and training.

The French record in the various colonial and European conflicts had been at best mixed, the Franco-German War of 1881-1882 had been a catastrophe of epic proportions in which, France had lost much in military prestige, territory and even more in terms of lives and treasure. The German Empire, had snapped up French Guiana in South America, the French islands of Saint Martin and Saint Barthélemy in the Carribbean, and French Guinea, the Gabon and the French Congo in Africa. In Metropolitian France itself, the departments that formed the whole of the region of Alsace, Lorraine and Bar had been absorbed into the special Franco-German border Reichland, and were even now being reorganized as the German Grand Duchy of Elsass-Lothringen. The departments of the Artois, Picardy and Champagne regions of North-eastern France had been annexed into the Kingdom of Belgium, which was now a member state of the German Empire. Boulanger shuddered involuntarily at the memory of that war, now eight years gone, although the physical, emotional and societal marks it had left on France had yet to fully heal.

Further military and political frustrations were to follow, as France had endevoured to build upon it's remaining colonial empire in Africa. While the borders of French Algeria, Mauretania and Senegal had generally been pushed forward, they had been brutally rebuffed by the Wassoulou and Tukolor Empires when french columns had attempted to bull their way through their respective territories. One of the few bright spots in the African record had been in achieved in Senegal, with France finally acquiring the the British colonial embeded within it, the Gambia, by extended negotiations that had started in 1887. For the time being, France was stalemated in it's ambitions in Northern Africa. French colonial adventures in East Asia had generally been more successful, from the 1880s onwards, gradually gobbling up Cochinchina, Annam and Tonkin, although not without sometimes bitter local opposition, particularly by the Armies of the Yellow and Black Flags in 1881 and 1883. An undeclared war had erupted between China and France in 1884-1885, over Tonkin, and things had further been complicated by a massive uprising in Annam which had lasted well into 1886. Unfortunately this had caused the smoldering Sino-French war to flare up again will into 1886 with disasterous consequences, particularly for France, when two invading french armies were destroyed in Southern and Northern China, after making initially spectacular advances deep into Chinese territory respectively.
Posted by Sir Leo Stanley Worthing-Topper at 9:18 PM