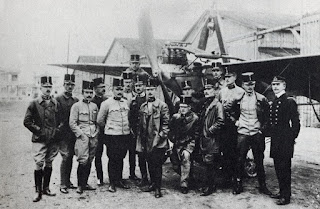 Austria-Hungary maintains two distinct military air services within the k.u.k. Wehrmacht, the first being the Imperial and Royal Aviation Troops (Kaiserliche und Königliche Luftfahrtruppen or K.u.K. Luftfahrtruppen) which is maintained and operates in support of the k.u.k. Heer, k.k. Landwehr and k.u. Honved.  The Landwehr and Honved, operate a variety of aircraft as part of their communications, staff and troop liasion establishments but do not not maintain or operate military aircraft units, this is reserved to the k.u.k. Heer alone.

The second air service, the Imperial and Royal Naval Air Corps (Kaiserliche und Königliche Seefliegerkorps or K.u.K. Seefliegerkorps) is an integrated part of the k.u.k. Kriegsmarine and operates on it's behalf from various naval air stations.

Both air services begin their initial and intermediate aeronautical training at the Imperial and Royal Flying School, located in  Wiener Neustadt, in Lower Austria. Subsequently the army flyers finish their training and studies upon graduation from the Flying School at the k.u.k Flieger Arsenal at Fischamend, the naval flyers go to k.u.k. Naval Flieger Arsenal at the Pola Naval Dockyard. At both establishment the flyers undergo advanced and specialized training.